The summer is nearly over and on balance it has been fairly hot around the globe. Travelers are swarming airports and limits were set by authorities in Heathrow Airport for the daily numbers of transients.

The S&P 500 rallied mightily off the June 17th bottom of 3,636 all the way up to 4,320 on August 16th; only to succumb to profit taking and Fed Chair Powell's sobering Jackson Hole, WY speech on inflation fighting priorities. In 15 trading days half of that rally was lost as reality set in that the Fed is not about to pivot to more easy money policy any time soon.

Powell did not pivot, rather the bulls ran toward the exits.

The war in Ukraine rages on with little hope for a settlement. China is rattling sabers over Taiwan after Nancy Pelosi's swan song visit.

President Biden managed to sign several spending packages including the infamously titled “Inflation Reduction Act” and another for the semiconductors industry. Combined they total over $500 billion in new spending, according to PwC. For good measure he has proposed forgiving student loans for a segment of borrowers which the Penn Wharton Budget Model estimated the 10-year cost at $605 billion. The vast majority of that cost comes this year…not very likely to curb domestic inflation. Government spending and creating more money produces more inflation, not less. Economics 101!

At the same time Powell is trying to fight inflation here in the US, Europe faces a regional drought and a self-imposed energy crisis this winter, while raising rates to check 40-year high levels of inflation. With all-time high energy costs across Europe, they are forced to rethink their energy policies.

China is still fighting Covid-19. Russia has managed to sell its oil to India and China, whom together rate as the #1 and #2 polluters on the planet. Fossil fuels still account for about 82% of global energy consumption, according to Bloomberg.

Historically when inflation runs in the +8% range, Price/Earnings multiples for stocks have averaged between 11x and 9.3x earnings. Current P/Es are around 18x according to Truist Financial. The discrepancy can partially be attributed to today’s relatively low interest rates: 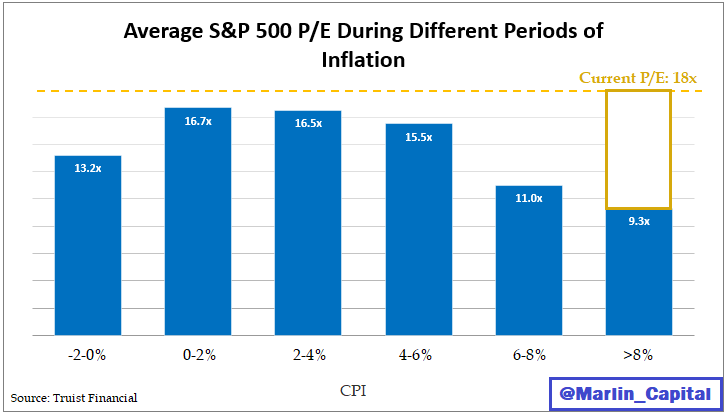 Despite the -16% decline in the SP 500 index through August, Q2 earnings results were still very good but 72% of S&P 500 companies provided negative guidance. The S&P 500 reported growth in earnings of 6%, the slowest rate since Q4 2020, all data according to FactSet.

Confusing? Also confusing for the experts who are all over the spectrum with their market prognostications.

Markets look forward, not backwards. Markets hate uncertainty, which we now have by the bushel full.

As for stable fixed income investments, 2022 is one of the worst bond market years on record, according to PIMCO. AGG, the iShares US Core Aggregate Bond Index is down 10.7% through August.

We remain defensive in our investment posture, keeping in mind that stocks go up over time but not ALL the time.

As Q3 draws to a close we expect both business and consumers to rein in spending in an attempt to cut costs. Earnings estimates are likely to come down in 2023 and margins will shrink for most of America's businesses.

We look forward to fall weather ahead.