U.S. stocks closed out Q1 with their worst performance since the depths of the 2008-2009 financial crisis. 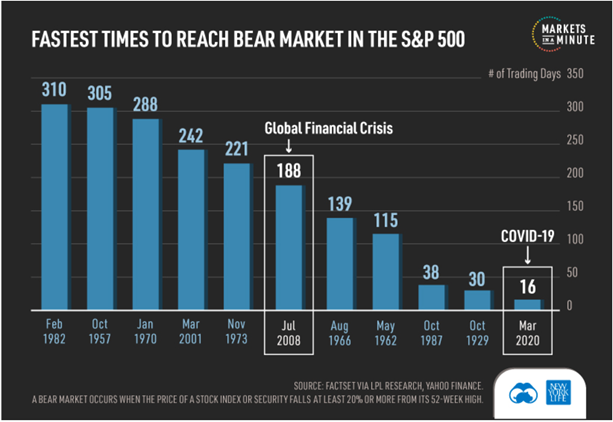 So, you may ask: What led to this drastic drop?

Massive population lockdowns have led to a "self-induced" slowing of economic activity by governmental decrees in China, Japan, Korea, and Singapore. Soon after in Europe, North America, India and the southern hemisphere. At this time only social distancing slows the spread of this incurable disease.

The impact of COVID-19 and its negative effects are ongoing.

Major investment bank research departments have forecasted a GDP drop between 24% and 34% in Q2, and another potential decline in Q3.

Unemployment will move from record lows of 3.5% in early February, to Depression era levels perhaps above 20%.

The U.S. Government has devised a $2.3 Trillion fiscal package to provide funds for "laid off” and furloughed workers, in addition to small and large businesses suddenly deprived of cash flow. The funds are meant to provide "temporary cash flow shortages" that have been caused by the quarantine.

Additionally, the Fed has lowered short term rates to zero and begun buying various types of bonds in order to ease liquidity problems in the bond market affecting both corporate and municipal categories. Lower quality bond spreads versus UST's, exploded to 2009 levels in mere weeks.

No one knows how long or severe the impact of COVID-19 will be. The onslaught of business shutdowns and social isolation breeds unknown concerns for all affected parties.

Healthcare delivery and supplies of basic needs are straining at capacity levels and beyond.

It appears Asian countries now have the virus spread under control. Cities previously closed are reopening, as are the businesses. Europe will follow in a month or less. We seem to be following in same processes of our global neighbors.

Panic selling gave way to rapid bounces not seen since the 1930’s. A month end climb of SPX +17.9 is off the low ended the worst Q1 in our lifetimes.

While this crisis is unlike any other in modern days, we observe market patterns that rhyme with past declines.

The "Cavalry," that is our FED and Congress came to the rescue and a bounce of consequence happened.

While no one can game this decline's path in a computer model with certainty, a test of the initial low is likely.

My opinion is just that, this pattern has occurred after many bear market declines. We typically move from greed to fear, then back to greed quickly after the initial bottom. Investors will come to understand that real solutions take time as we move back into fear and even depression.

This second phase takes time to develop and leads to a secondary low.

What was known as the “old bull market” is history. We have entered a recession of unknown magnitude and length.

We have the government watching our backs.

Will the money provided be enough to close the gap and hold up consumption of goods and services?

Earnings will decline as will GDP. Unemployment will climb to record highs not seen in decades.

After the peak of COVID-19 cases is reached, people will feel more optimistic and ready to return to work and their normal patterns. It will take time, but Americans are both resilient and hard workers.

How will people react post this experience depends on the length and severity of the crisis and lockdown period.

To help endure this storm, some cash was raised early in this process. We are looking to take advantage of bargain basement prices that were and may again be offered in bond and stock markets. We are managing risk in a prudent fashion given the nature of this extraordinary time.

While we expect volatility to diminish from levels last seen in October of 2008, we recall that the lows of that cycle were not reached until March of 2009. This cycle may see a faster recovery, but much is still in the fog of war.

This is likely to be a long year for everyone. Our patience will be tested and will pay off in the long run, as we work our way through this process.

We are here for you!  Don’t hesitate to call if you wish to discuss any aspect of your personal situation.

All the best and stay safe!