As the Coronavirus spread creating various degrees of lockdown from state to state, we have come to appreciate our diversity and adaptability as a nation. The U.S. epicenter is in NYC and Northern New Jersey. Our hearts go out to all who are suffering.

Shelter in place orders spread from China, through Asia, then to Europe, the USA and now to Australia, South America and Africa. Only Antarctica has been spared.

Consumer patterns shifted suddenly, as have many other aspects of our lives. Supply chains of all sorts have been stretched. The length of time needed to stay sheltered is unknown and controversial. Now 10 states with fewer cases are opening up their economies, as have China and various European countries, even the hardest hit like Italy.

Given the new restrictions in our lives, providers such as Amazon, Google, Netflix, Microsoft, Walmart, Teledoc, UPS and Zoom have allowed us to function from our homes in the best ways possible.

With a 4.8% Q1 decline in GDP stock and bond markets took a body blow.

Nasdaq 100 trust -QQQ- fared the best with no loss on the year, thanks to strong earnings and sales by FANG stocks. Small caps finally rallied 6 days straight in April, but the Russell 2000 index is still down 21.3%.

Concerns are rising that we are becoming more like Europe and Japan. That means slow to no growth ahead after they bounce back. Tax rates will very likely go higher after the election and new year. 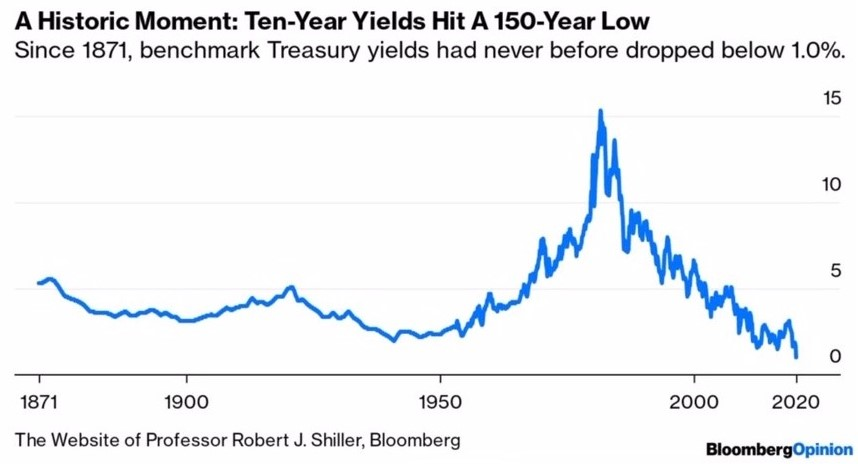 Other “safe“ income producing assets like corporate bonds, real estate, municipal and mortgage bonds have suffered losses, as income streams were hurt or became doubtful. Recovery will be gradual as the Fed supports bond markets and our economy opens. Spreads have widened on all bond categories versus US Treasury rates.

Records were set this year for the speed of any decline into a bear market, including 1929.

More jobs were lost in 2 months than any other period in our history, now 30 million and counting. All employment gains of the previous 11-year expansion, that began in March of 2009, have been lost. We have entered a recession seemingly overnight.

Energy prices plunged in April when WTI May futures went to negative $38 as speculators were faced with taking delivery of actual crude oil and panicked. The energy complex is in disarray. U.S. wells are closing as OPEC reduces supply. Demand has fallen through the floor globally.

Gold has proven to be a long-term asset of value as our government triples deficit spending, with the rescue package of more than $2.4 trillion. The Fed has once again expanded its balance sheet to $6.5 trillion from $4 trillion. Our budget deficit will balloon to $3.7 trillion, in a $22 trillion economy. That is a peace time record.

What does this all mean for investors?

Economic forecasters such as Bank America and Goldman Sachs predict a drastic 30% drop in GDP for the current quarter.

A leap in production and consumption will likely occur in the second half of 2020, as we begin the process back to a “new normal.” A vaccine is 9-18 months away according to the experts, so expect shy consumption trends in the coming months. Concerns abound about how quickly employees can return to physical works spaces, like restaurants and movie theaters. Who wants to fly, cruise or go to a ball game?

Full year 2020 GDP is likely in the range of -6% according to Goldman Sachs. SPX earnings may decline to $110-$120 this year versus $165 in 2019. Next year SPX estimates ranges from $140 by some to $170 at Goldman Sachs. Price earnings ratios are elevated. Buybacks have slowed and dividends are being cut.

Frankly, no one knows how this eventually plays out, as the virus has its own plans.

We are focused near term on capital preservation and longer term on growth. We expect a super low interest rate environment for some time to come.

FED policy is to return us to full employment, and they will accommodate with ample liquidity.

Given the massive FED stimulus and positive market reaction in April, the sun has begun to shine once more.

Bull markets start in recessions and there is no doubt we are in a recession. Bear markets are shorter lived but are rarely “V” shaped.

As we continue to monitor developments, don’t hesitate to contact us with questions and concerns. We are here for you!

We wish you good health and a springtime of sunshine and increasing social activity.

Remember that in every crisis there is opportunity!