On the very first trading day of 2022 the S&P 500 hit an all-time high. For the rest of the year, the index and nearly all other types of financial assets headed lower. 2022 marked only the fourth year since 1929 where both stocks and bonds finished negative, and the first time since 1969. The U.S. dollar and oil were the only major assets to finish in positive territory, according to TD Ameritrade data.

After the big three-year run for stocks culminating in 2021, we became more cautious. We were not surprised to see inflation was more than "transitory," as the Fed incorrectly predicted last year. The rapidity of the Fed response, once engaged in tightening, was difficult to manage as the year progressed. 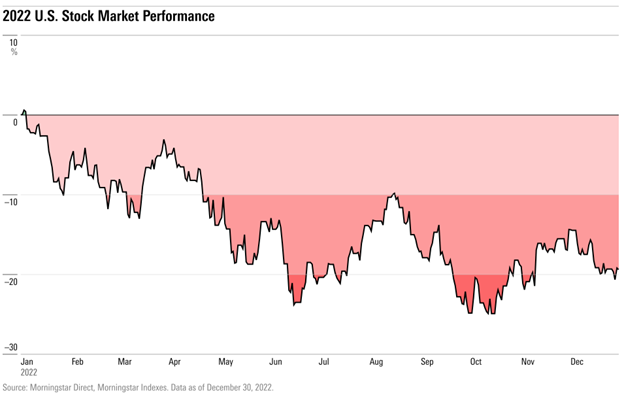 Market participants have known since June that 2022 was going to be a very difficult year. The final numbers were historical. The bear market delivered the 7th worst year in history for the S&P 500, which fell 19.4%, while the Nasdaq cratered 33.1%.

Major bond indices suffered their worst losses on record. The Bloomberg Aggregate Bond Index is a common benchmark in our industry, it sank 12.9%; prior calendar year losses had never exceeded -3%. The U.S. 10-Year Treasury note’s previous worst year was 2009, declining 11.1%, and last year it lost 16.2%. The U.S. 20+ year Treasury bonds (TLT) finished -29.8%, while Investment Grade Corporate Bonds (LQD) were down 19.1%, all data according to Bloomberg.

The reason behind such a historic drop was inflation hitting a 40-year high, which caused the Fed to engage the quickest tightening campaign in history. The federal funds rate was raised seven times for a total of 400 basis points (4%). Going into 2022, the Fed had projected raising rates only 50 basis points. 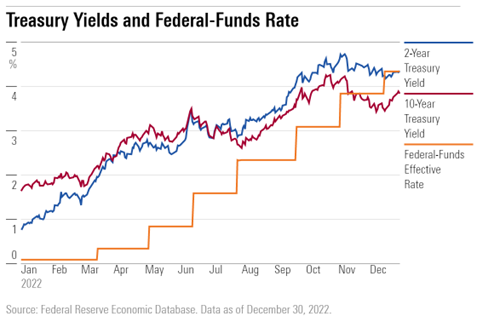 The Crown Investment Committee collectively has 100 years of market experience (some of us are rather old). We believe interest rates and corporate earnings drives markets more than other variables. In 2022, interest rates were the spoiler, while earnings held up well. In 2023, earnings will be the focus as the global economy flirts with recession.

Consensus earnings are expected to rise 6% for the S&P 500 in 2023. We believe this is wishful thinking.

Other respected analysts forecast a 10% decline to the area of $200 per S&P 500 share. This outcome may very well lead to another negative year for stocks if the Fed keeps rates elevated for all of 2023.

Our primary concern is the risk of recession. Recessions are typically preceded by an inverted yield curve, which is what we have had since July 2022. Most economists anticipate weakening GDP, both here and abroad in 2023; reasons include consumer spending declines, capital spending cutbacks, and rising unemployment. We believe a recession has yet to start but is likely in the coming months. How deep a recession is baked into current market prices is a question analysts are debating.

We continue to focus on preserving your hard-earned capital while also taking the appropriate amount of risk to make you reasonable returns over the long run.

The Fed has a lot of work to do before we approach 2% inflation. Short term rates could reach 5% in 2023. Recent Fed meeting notes disclosed that "No participants [voting Fed Governors] anticipated it would be appropriate to begin reducing rates in 2023.” This is ample proof that the Fed is determined to continue their fight throughout the year.

There is plenty of pessimism to go around, which is typical in the midst of a bear market. However, all is not lost.

Inflation may retreat faster in 2023 than many now anticipate.

Republicans, who now hold a majority in Congress, should put a lid on spending for the next two years.

The high-end consumer still has plenty of cash while the low-end consumer receives more than ever in government subsidies, keeping recession in check.

In order to climb back to all-time highs for the S&P 500, it needs to rise 26%. Patient investors will be rewarded.

Lastly, people are resilient, especially Americans. Markets will do their job of capturing human innovation and determination taking place daily within the publicly traded companies we invest in.

Our outlook is for continued volatility, better returns from bond markets, and a tough first half of 2023 for stocks, given the direction of earnings.

We remain steadfast in our ability to help you achieve your financial goals.

We wish you all a very happy, healthy, and prosperous New Year!

Back to Investment Committee Commentary